My dear friend Joshua recently and foolishly suggested that his Korean food choice in Queens would be “just as good” as the food I’d be eating in Seoul, the land of morning calm city I was currently vacationing. As a former resident of Seoul back in 2011 and an enthusiastic advocate of all things Korean culture, I considered myself a perfect opponent for this foodie challenge. To prepare, I brushed my teeth in gochujang, the defining sauce in Korean cuisine, and I gargled with the juices leftover from the kimchi jar. This was going to get fierce.

I knew I would emerge the champion as soon as he reported back to me how good the miso soup was.

“Miso Soup?” I gasped. Holy Girl’s Generation this is unacceptable. Miso soup is a delicate, mild and calming broth — with clear origins from Japan. If you’d like to represent Korean soup then a simple addition of kimchichigae would suffice. Its spiciness, warmth and surprising nuances in flavor is a more appropriate match to bibimbab and it’s actually Korean. Mind-boggled. America, I love you but sometimes you are sweet dum dum in a laundry hamper when you try to be cultured.

Are we working on a point system here? I’m clearly in the lead already.

When I went to visit Seoul for my vacation week, my travel companion and I had one streamlined goal of immediately getting off the flight and taking the subway to drop us off at our favorite Korean restaurant called Yoogane. This place is known for its dakgalbi, a marinated chicken BBQ that dreams are sourced from. We arrived early, and stared into the windows until they opened.

Korean BBQ is something of a community experience, a social way to relax. I imagine that’s why Korea is sometimes labeled as the Italians of Asia— their food culture centers around a leisurely way to socialize.. Rarely do I ever see people eating alone here, unless it’s a small cafe or coffee shop. The metal grill in the center of the table encourages active participation in the cooking process with metal chopsticks and cooking scissors, a beautiful Korean kitchen tool.

Leah and I were quite excited to be here and relive our time spent teaching English in Seoul. Back then we frequented this establishment after the long days of working with children drained us of energy and a will to live. We longingly stared into the dish as it started heating up our hearts and hunger pains.

The ingredients piled into our pot and our moment had began to deliver. Dakgalbi doesn’t use lettuce wraps like other more common forms of Korean BBQ, but instead tosses marinated chicken, cabbage, onion, and rice cake into the grill. When it’s ready, the servers will turn the grill to a low heat to keep it fresh and fabulous. 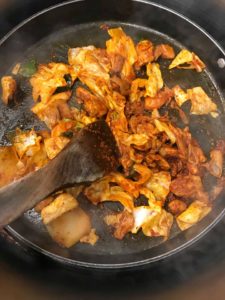 Sometimes you can add other treats and treasures to the BBQ like sweet potato and noodles, but we refrained because we knew the next step in our meal was going to rock our kimchi-blown minds with an addition of rice and special seasoning that mixes with the extra leftover chicken and charbroiled extra sauces that cling to the metal dish. Our server was so charmed by our unbridled enthusiasm for dakgalbi that he created this lovely heart to show his appreciation for a fellow connoisseur.

Imagine a cheesy fried rice blend of seaweed seasoning and savory spices, an encore of your dakgalbi that provides a sizeable expansion of your waistline and a happiness that can’t be explained with the constraints of language. This meal has the potential to heal broken hearts, cure diseases and achieve world peace.

That was literally the only thing I ate that day; it is not a meal for the faint of heart and needs a long walk afterward in order to feel like a functioning human. The beauty of Korean food is in its simplicity and messiness.. It’s a gorgeous collection of meat, veggies and sauces grilled together in a marinated spicy pepper sauce served with friends and soju to wash it all down. A treat for all of your senses, it’s spice and fun and comfort like a surprise tango class with your lover or a family reunion with an aunt you know has some juicy stories about her travels to India and that one time she had relations with a band member from Maroon 5.

If you eat in Korea, then you also might pay less than 10,000 Won for your meal, which is just $10. No tip, no tax. Just simple delicious food that will inspire k-pop love songs until the end of your days.

Megan is a contributor to Newdie magazine, and a former English teacher in Seoul who enjoys spirited debates about how Korean food is better than your country’s food and eats more kimchi than most Koreans would deem appropriate.

Megan Kojima is an expert traveler who is published in Cosmopolitan magazine, Megan Kojima is the original Newdie Mag contributor (that’s right, the OG, she’s brought you everything laughs from her First Date Follies to scares in Gore-met the Halloween article). Every Wednesday she will take you on a food journey around the world to experience different cuisines and cultures. View all posts by Megan Kojima