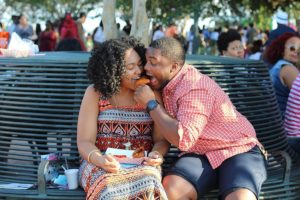 “Careful, that’s hot! Let it cool off before you eat it.”
That is the advice of Malana Joseph Mitchell, vice-president of public relations for the Spears Group. Mitchell’s company puts on the upcoming National Fried Chicken Festival presented by Raising Cane’s in New Orleans.
She has seen quite a few patrons burn their tongues while biting into some delicious fried chicken but still have a look of satisfaction from the taste, she said.
Perhaps they are into a bit of pain with the chicken? I’m pretty sure there is a Tumblr devoted to that, but I’m afraid to look it.

The National Fried Chicken festival started just two years ago and has grown by leaps and bounds, much like someone who has eaten too much fried chicken.
Cleveland Spears, the founder of the Spears Group, along with Malana and her team handled the growth spurts better than I ever handled growth spurts during puberty. That, however, is another article that you definitely do not want to read.
The first year the festival attracted 40,000 attendees. This year organizers are expecting 200,000
How did they handle all of this growth? They added a second day after the first year at Lafayette Square and quintupled (that word is hilarious-looking) the size of the festival from 108,000-square-feet to 520,000-square-feet moving it to Woldenberg Riverfront Park.
They also listened to their fried chicken-loving patrons. They added a kids area and live music to the festival to get the place rockin’.
If you think you can outeat anyone there is a Raising Cane’s chicken tender-eating contest. Last year the winner was from Tuscaloosa, Alabama, and scarfed down 10 large and delicious Raising Canes tenders in just 2 minutes and 10 seconds.
I think I would have to also down a bottle of Pepto in two minutes after that feat. Don’t look for Malana participating in the chicken tender-eating contest either … she says she would gross everyone out if she did.
There are two competitions each year to crown a competitive fried chicken champion. (A third crown will be awarded by me if you can say “crown a competitive chicken champion” 10 times fast.) The two are “Best Fried Chicken” and “Best Use of Fried Chicken in a Dish.”
I could get creative with the second one. Perhaps you’ll see an episode of Cooking with Comedians by Newdie Mag: Fried Chicken on Peanut Butter and Jelly Sandwiches (Just give me the crown now, please, Miss Malana).

This year Fiorellas Cafe is looking for a three-peat. Let’s see if “Your favorite old place, reborn with a new face” can hang on and bring the title back to 1136 Decatur St.
If you’re on the lookout for something fun to watch (besides subscribing to our YouTube Channel … seriously … subscribe) head over to the “Rouses Sizzle Shack Cooking Demo” stage, where various chefs will be showcasing how they prepare their famous fried chicken dishes.
The third annual National Fried Chicken Festival presented by Raising Cane’s is scheduled to take place from 11 a.m. to 9 p.m. on Saturday, Sept. 22, 2018, and from 11 a.m. to 8 p.m. on Sunday, Sept. 23, 2018, at Woldenberg Riverfront Park. It will showcase restaurants from California, Tennessee, Kentucky, Texas, Alabama, Georgia, Mississippi and Louisiana.
Local restaurants include We Dat’s Chicken & Shrimp, Ma Momma’s House of Cornbread, Chicken & Waffles, Bayou Hot Wings, Felipe’sTaqueria, Diva Dog and many, many more.
There also will be a variety of experiences for all ages including a kids pavilion, the GoNOLA Mist and Chill Lounge, the return of the Moet Chicken and Champagne VIP Lounge and the Crown Royalty Lounge will make its debut. 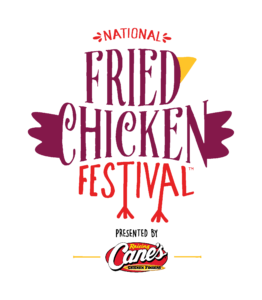