Gumbo is the “official cuisine” of Louisiana and down here people take it seriously. Really seriously. There are heated debates about who has the best gumbo and especially who has the worst. Disney was once forced to take down a recipe for “Tiana’s Healthy Gumbo,” which included kale and quinoa after a heated backlash. It didn’t even have a roux (see below)! We will include a few of the memes it spawned at the end of this article.

Part of the reason people may feel so passionately about gumbo is because every gumbo can be so vastly different. You can throw a lot into (or keep a lot out of) a gumbo and still call it a gumbo. The two main types of gumbo are cajun gumbos and creole gumbos. A cajun gumbo tends to be more meat-based with the popular meats being duck, chicken, andouille sausage and tasso. Cajun roux are usually darker than creole roux and the dish tends to be spicier. Creole gumbos often have tomatoes and cajun gumbos usually don’t. A creole gumbo almost always has okra which can be missing from a cajun gumbo. There seems to be more options for gumbo than options at a New York City diner.

To make a gumbo you start with a roux, which is melted butter and flour, cooked until it nearly burns. My mom would always make a really dark roux and my mom definitely makes the best gumbo (fight me, Disney). The roux only takes about ten minutes to make but a good gumbo takes several hours to make. It may be time-consuming but totally worth it, starting with the first bite.

Since gumbo can be so controversial, our recipe for this article is a WORLD CHAMPION. Every year, on the second weekend in October, the world’s passionate gumbo-lovers gather at the World Championship Gumbo Cook-Off in New Iberia, Louisiana. Ninety-plus teams compete for the title of best gumbo in the world. Here is the winning seafood gumbo recipe from 2013. Recipe courtesy of Iberia Travel.

Peel and de-vein shrimp. Put raw shrimp aside. In pot add shrimp peelings to 1 quart of water and boil 15 to 20 minutes. Remove peelings and throw away. Put stock to the side.

Sauté onions and celery in roux until cooked. Add in can of tomatoes, can of tomato sauce, 5 quarts water, shrimp stock and crab boil. Cook 1 1/2 hours. Add shrimp, crabmeat, crab fingers and oysters with juice. Season to taste with salt and red pepper. Add green onions and parsley. Let boil until seafood is cooked (approximately 20 minutes).

Serve over Louisiana rice and enjoy. Makes about 8 quarts.

We hope you watched the video up top! If not…scroll back up now ^^^^ and watch the hilarious Laura Sanders eat a bowl of gumbo in New Orleans. Make sure to download Laura’s album “Oh God Please Like Me” on iTunes and check out her website at http://www.laurasanderscomedy.com/ 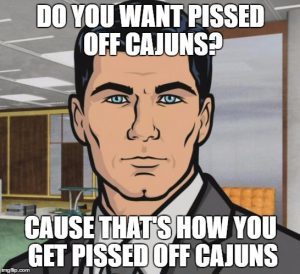 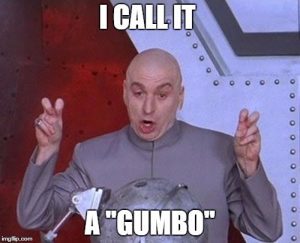 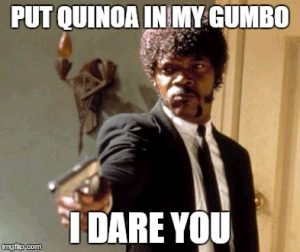 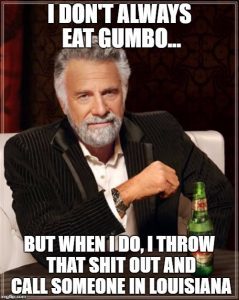 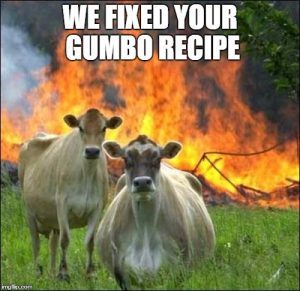 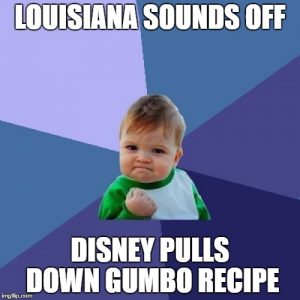 2 thoughts on “Gumbo: The Taste War”