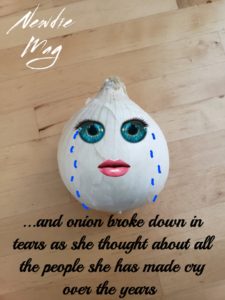 1) Onions make you cry because when they are cut they release chemical irritants known as amino acid sulfoxides. Your brain registers the irritant and the lachrymal glands above the eyelids then release reflex tears.

2) Roman gladiators were rubbed down with onions to firm up their muscles (rubs self with onion… perhaps I should have muscles to begin with).

3) In Blue Hill, Nebraska there is a law that says no female wearing a “hat that would scare a timid person” can be seen eating onions in public.

5) Libyans sure love onions. The average Libyan eats 66.8 pounds of onions in a year. They eat five times more onions than the average person (I hope they also like parsley).

6) The largest onion ever grown weighed 17 pounds and 15 ounces according to the Guinness Book of World Records. It was grown in the UK by Peter Glazebrook.

7) Ancient Egyptians believed that the onion’s spherical shape and concentric circles represent eternity, so they worshipped onions. Onions were placed in the burial tombs of Pharaohs as they thought they would bring them prosperity in the afterlife.

9) The official state vegetable of Georgia is the Vidalia onion, and in Texas, the sweet onion.

10) Shallots vs. onions? (Since I didn’t know the difference)

– Both onions and shallots are part of the Allium family. Shallots have a milder and much sweeter flavor than onions.