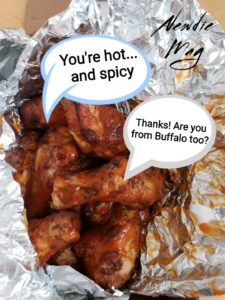 A night out at a wing bar

The Buffalo wing was invented by Teressa Bellissimo at the Anchor Bar in Buffalo, New York in 1964 (54 years old? I know math, I swear). It grew in popularity in the 1970s and 1980s. In 1977, July 29th became National Chicken Wing Day. Buffalo Wild Wings was founded in 1982 and Hooters’ (Bazinga!) World Famous Wings came into existence in 1983.

In the ’90s, the Buffalo Bills made the Super Bowl four times in a row, which really boosted the popularity of Buffalo wings as something to serve at Super Bowl parties. (I don’t follow the sports ball.) Now, the average American eats 90 wings per year. On Super Bowl Sunday alone, 1.25 billion Buffalo wings are consumed. (I do watch the Super Bowl for the commercials, just like men read Playboy for the articles.)

Are you ready for National Chicken Wing Day? Here are a few of our favorite recipes (including my favorite ranch recipe at the end):

Melt butter in a sauce pan and add honey. Turn off heat.

Mix in hot sauce with a whisk.

Do not heat more. Set aside for later.

Cut wings into three pieces, discarding the ends (or keep for stock if you’re fancy af).

Mix flour with salt and pepper and coat chicken wings in the seasoned flour.

Preheat oil in a large skillet to fry your wings.

Place wings in hot oil and fry for about 4-5 minutes, then turn them over and cook the other side for about the same time.

Remove the wings and place them on paper towels to drain the grease.

Place the cooked wings in a large bowl with your Buffalo sauce and toss them until it evenly coats the wings.

Cut wings into three pieces, discarding the ends (or keep for stock if you’re fancy af).

Mix flour with salt and pepper and coat chicken in seasoned flour.

Preheat oil in a large skillet.

Place wings in hot oil and fry for 3-4 minutes, then turn them over and cook them for about the same time.

Bake wings for another ten minutes.

In a large bowl, toss wings with melted butter and lemon pepper.

Combine all ingredients in a large bowl and whisk until completely mixed;

Cover and refrigerate for two hours