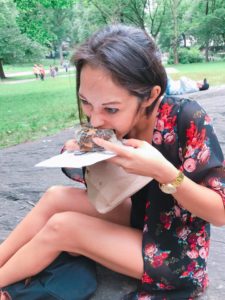 It finally happened. On a rainy summer morning, as I rummaged through my purse looking for a headband to tame my locks made curly by the outside curse of humidity, my coffee barista object of primal infatuation locked eyes with me for more than the casual two seconds allotted to strangers who seem mildly attractive. Two became three, then five, and his eyes stayed lingering on my own for more than six seconds of crush eternity.
I paused, remembered to blink, then answered his question.
“Yes, that’s fine. Almond milk is fine.” They were out of soy, my usual go-to. “You know, I don’t need soy milk in my life. You know what they say about soy milk…”
When his blank expression led me to believe that no, he certainly did not know what they said about soy milk, I threw back my head and laughed, laughed, laughed, my statement turning into a hilarious joke that he didn’t understand but hopefully wanted to.
I realize it might seem strange that I landed a date for that weekend with my Barista Boy, but I was told later he was thirsty and had a thing for Asian girls. I was Asian enough, apparently, even though I was culturally less Asian than Scarlett Johansson.
But hey, my face was an Asian doll replica, and there we were on a Friday night, sitting across from one another and maintaining eye contact for even more than six seconds. I melted into those eyes, the green-blue eyes that became brown in the dark, where I hoped the night would take us. I fought the urge to grab his ruffled squirrel’s tail textured hair, and wondered if I’d be able to keep my pants on throughout dinner.

“Settle down,” I warned myself. “You’re in public.”
I briefly floated into a daydream about Barista Boy and me on our honeymoon in Antarctica, and realized that this guy was the real deal. Our children would be experts in the fine art of coffee-making, and I could not screw this date up. The stakes were high and I was about to Secret him into being my future husband.
Sauntering to our table came a vaguely European man with suspenders.
“Menus for you both,” he said, handing me a book neatly organized into appetizers, entrees, and desserts. What a fancy place, I thought. Barista Boy must be really into me.
“What should we order for appetizers?” my beautiful date asked me, his voice sweetly careening into my ears like a slow drip of honey curdling in my ear drums.
“Order?” Oh no. I did not think this one through. With anxiety tearing into my eyes, I looked at the book, flipping through the pages and wondering how long it would take him to notice my absence if I ran out the door. I’d been so fixated on the affirmative response I’d gotten from my object of desire to meet with me, that I’d completely forgotten my greatest fear, the fear of ordering food on a first date. It had moved up in my fear ranking, surpassing my previous greatest fear, the fear of industrial factories.
To this day I regret not asking him to see a movie. You can’t physically screw up a movie date. It’s impossible. If you get awkward you can just pretend to be intensely into the plot of the dumb movie you’re not paying attention to.
The first date meal is the most important meal of any long-term relationship. It sets the tone, it communicates desire, it reveals fears and hesitations and character flaws. It is the only thing he will remember. It is the only thing that matters.
Memory after memory of previous horrific dates flashed through my mind like a freakish slideshow, and I was forced to relive each moment as though it were happening to me all over again. I clutched my menu and used it to cover my face, acting absorbed in the delicious options as my previous mistakes taunted me.

First, there was Chad. Chad with the glasses and the diplomat dad, Chad who knew how to pronounce the French words looking ominously up at me at Cafe Alsace, Chad who scoffed with the intent of a man who knew his worth when I suggested we ask for olive oil to go with the bread.
“You do not have olive oil with bread in France,” he shook his head. “I am sorry. This is not going to work out.”
Lesson learned, Chad. Don’t order food that you don’t know the rules to. That includes never ordering cappuccino in Italy after 2pm, always slurping your noodles in Japan, and of course never drenching bread in olive oil when it’s perfect just the way it is.
A few weeks later I casually invited my coworker James to a lunch date, his buff CrossFit-tailored arms just the right diameter for my narrow shouldered frame to fit inside. Yes, I know what you’re thinking, and yes, I did secretly measure his wingspan to make sure that he was the appropriate length for our inevitable embrace. It was tricky to pretend that I was reaching for the stapler when in fact I was stretching out my tape measurer across his chest.
James, oh James. How did I dare order a plate of BBQ wings in your presence? The sauces, oh the sauces! My chin captured most of my food that day, and that beautiful heartbreaker didn’t even have the decency to tell me to use a napkin. No, he was apparently so shocked that I’d ordered a living creature that “died at the hands of factory farmers motivated by profits and death.” Before you go on a date with James, you should know that he is a strict vegan and will judge you harshly for ordering food that once had eyes. He didn’t even notice my BBQ-stained chin, nor the bits of chicken bone stuck between my teeth. He was too concerned with my inability to stick to my convictions.
Lesson number two: Don’t order food that conflicts with your date’s philosophical views on morality. That doesn’t necessarily have to be meat… it could be a strict policy against pickles, or any food that contains mushy peas because it wasn’t locally grown. All food can be offensive to someone, and unless you’re prepared to dive deep into a therapy session unlocking hidden childhood indignities, it’s best to stay clear of any potentially controversial items on the menu.
Which leads me to the next memory in my treasure chest of terrors. The blizzard in New York inspired me to find a date in my yoga pants, finally swiping right on my next date, Frederick, a beautiful man that happened to live three blocks from my apartment. I loved the way he quoted Margaret Atwood on his profile to demonstrate his feminist-friendly personality.
Unfortunately, Frederick was scared of ketchup. I was unaware of this phobia until I haphazardly ordered a side of French fries with my burger at the only restaurant in the neighborhood open and close enough to shuffle to in snow boots and a down comforter jacket. The moment I knew we were over before we even had a chance to begin was when I offered him some fries with the ketchup conveniently draped over the bouquet. His face suddenly drained of all blood and feeling. He screamed, outraged beyond anything I’d ever seen. It was, in retrospect, kind of hot.
“NO!”
Fries flung everywhere, the ketchup splattered against his hands like blood and the fries victimized as a casualty of war. I bit my lip to keep from crying. Those were my favorite fries, so crispy on the outside with soft pillow potatoey dreams on the inside. They were gone, just like my hopes of getting laid during a New York City blizzard.
I learned later that he suffered from Mortuusequusphobia, a very real phobia that means you are scared of tomato ketchup. Look it up. That shit is real. As was my unwanted celibacy. Lesson three: Don’t scare your date by ordering ketchup.

It took a while for me to venture out into the restaurant dating world again, but when I strolled down Central Park and noticed the blossoms of spring twirling her sweetness around the air, I began to warm up to the idea of romance. I agreed to a blind date arranged by my roommate. Ali had all the markings of a decent human being, and I was well prepared to face any situation. After a ketchup massacre, I’d hit bottom in my dating repertoire.
I didn’t realize that even if you hit bottom, you can always dig deeper with the right tools. Dig I did, with Ali and the three other dates that followed him as my unknowing assistants in said dig.
Ali, on the delayed subway platform at 4:30 A.M. on a Thursday, I’m so sorry I let you try my food. Haven’t you ever heard of Pad Thai? I would think that someone as deathly allergic to peanuts as you would be aware that Pad Thai’s main ingredient is, in fact, peanuts. Lesson four: Don’t kill your date by ordering something he’s allergic to. Save that for after your 20th wedding anniversary when you can’t stand him anymore.
Louis, the straight guy at the gay bar, I had no idea that you’d be such a good kisser! If I had known that, I would never have ordered such a garlic-intensive dish as that risotto we shared in Little Italy. I’m deeply sorry for making you gag like that. I should have taken up your offer to get ice cream after dinner to balance the breath. Lesson five: Garlic and onions are your worst enemies. Don’t order anything unless you know what ingredients are inside that pasta, and know your spices! Basil good, garlic bad. Mint good, rosemary better.
Finally, my very last attempt at love before meeting Barista Boy: a lighthearted attempt at cultural sophistication to make up for my original French restaurant mishap. “Dim Sum!” I proclaimed to Dennis, the Bumble guy, when he asked me if I knew cool places around town. “I know the cutest place. It’s just so good. You’re going to love it.” I was turning things around for the better, or so I thought.

He was unfortunately not amused when I eagerly bit down on a steamy dumpling and simultaneously opened a squirt gun hole that targeted his eye with the hot greasy dumpling guts. “Oh,” I muttered, not even bothering to chase him as he fled the table. “Well, that makes sense.” Resigned to my fate as a first date apocalyptic destroyer of men, I ate the rest of the dumplings with flourish, wondering how many cats were too many cats.
And now, Barista Boy, looking over at me with those greenish, bluish, brownish eyes, considering me as his one-and-only, his eternal love, I knew that the next words out of my mouth had to be brilliant. They had to convey my knowledge of the perfect food to order on a first date. Pressure rose up into my eyes and my jaw hurt from the stress. I studied the menu once, twice, and three times again before smiling apologetically and asking for a couple extra minutes to decide.
Finally, the moment of truth. Would I conquer love or would love conquer me, slapping me and making me order a salad with broccoli, spaghetti and meatballs, or Korean BBQ with roasted garlic?
“You know,” I said as I set my menu down carefully, “I had a late lunch. I’ll just have a glass of the house red please.”

Please note this is a work of fiction, Megan doesn’t go on that many dates (She is pretty and single though fellas). To read more from Megan check back here soon or visit www.kissesfromtheclouds.com